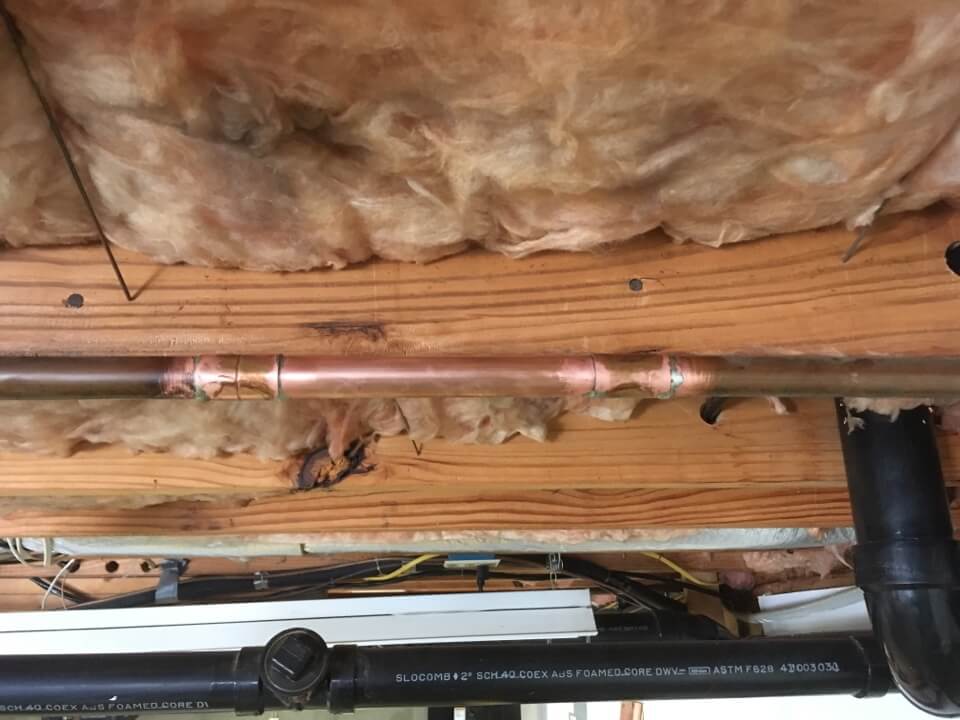 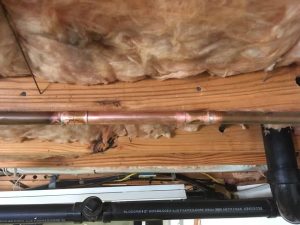 What Exactly Are Pinhole Leaks?

What Are Pinhole Leaks?

If you don’t know, a pinhole leak is (as the name suggests) a small hole that forms from the inside of a copper pipe and reaches the outside as corrosion builds up. While there are a few different theories on what causes this type of leak, no one is 100% sure why they occur. Regardless of what contributes to the creation of a pinhole, today we’re going to talk about what you should do if you have one.

Since they occur on active water lines (which always have water in them as opposed to drain lines), once a leak starts, it won’t stop. If you notice water spots on a wall or ceiling that don’t seem to change regardless of water usage, a pinhole is probably the culprit–and while these leaks usually start out very small, as I mentioned before, they won’t stop, so it’s imperative that you deal with them as quickly as possible.

If you have exposed copper lines in your house (such as in an unfinished basement or a drop ceiling), it’s not a bad idea to perform a visual inspection yourself every so often. Look for droplets forming on any pipes you can see, and pay attention to any areas of the ceiling/subfloor that appear wet–sometimes a pinhole can spray water in a very fine mist, making the leak itself difficult to see, but you’ll see where that mist is hitting other surfaces.

You can also sometimes spot a pinhole while it’s still forming by looking for greenish-blue spots on copper lines (areas around copper fittings will often turn this color because of the oxidation of the solder and flux used to seal them; you’re not looking for this, but isolated spots that aren’t near any fittings).

One Pinhole Leak Can Lead to More

The next thing you need to know is that pinhole leaks seldom occur one at a time. Most of the time, if we get called out to repair one pinhole we end up repairing two or more, and lots of times sealing one leak will cause another spot to accelerate, causing a new leak a month or two later. To keep you from experiencing this, we usually try to cut out and replace as much pipe around the leak as possible without running your bill up too much, but sometimes a new leak will show up in a different area of the house.

If you’ve experienced multiple pinhole leaks, it might be time to consider replacing all the copper pipes in your home–while re-piping can be expensive, it’s usually cheaper in the long run than repairing leak after leak after leak. If this is the case, call us to schedule a consultation where we come out to see what it would take to run new, improved water lines throughout your home.

How Do I Prevent Pinhole Leaks?

Whether you’ve already experienced pinhole leaks or not, the best way to prevent them from happening in the future is to install a whole-house water filter. A good one won’t be cheap, but it can keep the chemicals and minerals that many experts blame pinholes on out of your water system completely, and if it saves you from re-plumbing your entire house, you’ll still come out on top financially.

If you’d like to see what your options are for getting a whole-house filter, contact us, and we’ll be glad to help.

Came quickly and fixed quickly at a reasonable price. Would use again and would recommend! A+

Plumb Smart bailed me out of a botched DIY job a few years back. I've called Paul and his crew back four times since then to repair leaks and upgrade old components. I'm very satisfied with their response time, professionalism, and fee structure. I will continue to call on Paul and his crew for my plumbing needs.

Paul and the PlumbSmart team have been servicing my house since 2005. They are always very responsive, reliable, and honest. I highly recommend PlumbSmart to anyone looking for plumbing services within the service area.

Paul Little runs an honest, responsive business. I have used Plumb Smart in the past and his service is first-rate. I’d highly recommend considering Plumb Smart for your next plumbing job.

Paul was very responsive, arrived on time and solved problems quickly. We we very pleased. He and Sammie work quickly and efficiently.

I've had them fix leaky pipes, install a tankless water heater, and now a whole-home water filter. Each time they've shown up on time, done the work efficiently, and I've been very happy with the result. They also have fair pricing; best plumber I've ever worked with.

The service was great! I called at 8:00 am and they were able to fit me in that day. The guys were professional and the cost was reasonable.