Sigh. What should have been a simple fix is complicated by an unprofessional installation. It’s obvious from the photo below how off-center the shower valve is to the hole in the shower wall. We couldn’t get to the two bottom screws to easily remove and replace the cartridge. It took about 20 minutes of extra work that my customer had to pay for. I wish I could send the bill to the nimrod who installed it this way. 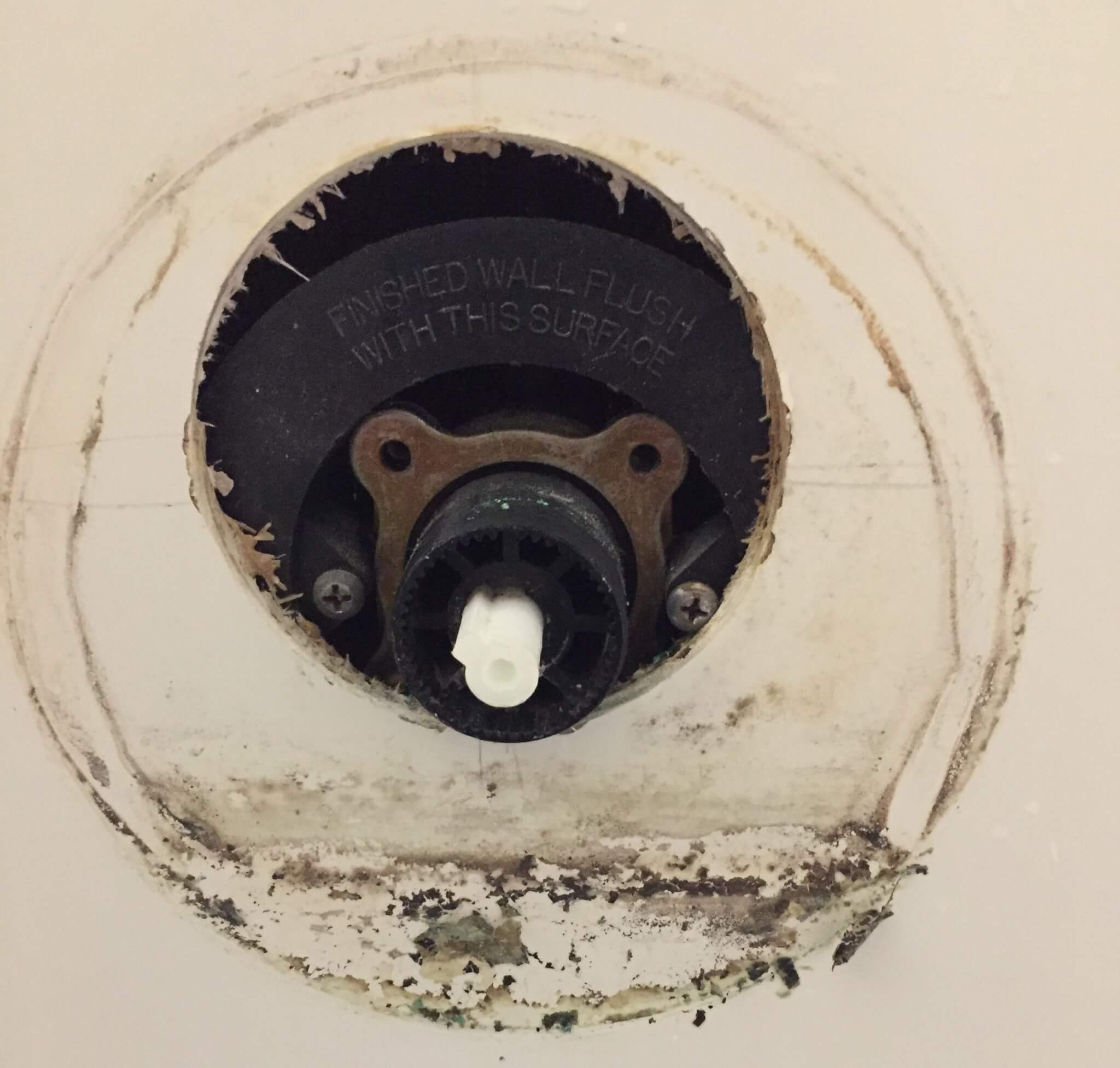 Some Things Aren’t Worth Buying Cheap

I can read the mind of the “plumber” who installed this shower valve with no consideration for the one who would have to replace the cartridge later. “It looks good from my house,” he said with a sarcastic chuckle.

I was raised by an engineer father who designed aircraft for Lockheed. What if he had said, while working on the propfan design, “It looks good from my house”?

People’s lives were at stake when he did his work and shoddiness was not even conceivable in his work. He passed this work ethic down to me.

My son Sam was with me when we removed the cover to this shower valve and exposed this unprofessional workmanship. Sam said, “How hard would it have been to install it a little higher?” All the installer had to do was attach the shower valve 2″ higher and it would have been perfect, but no, he didn’t care.

It bothers me when I see stuff like this. That’s why, after 20 years in the trade as a Master Plumber, I started Plumb Smart, Inc. One of our philosophies is to repair plumbing better than the original installation. In this case, it wasn’t very hard to accomplish.

We also strive to educate our customers on how and where to turn off the water in case of a leak in order to avoid catastrophes and prevent emergency situations. And you can rest assured, when you call Plumb Smart, Inc, we’re in the mindset of performing our work in the best most professional manner possible with a long-lasting repair or installation.

If you care about the quality of the work completed in your home, contact Plumb Smart.  We bring decades of experience to every job.  Read our reviews to learn more.

Came quickly and fixed quickly at a reasonable price. Would use again and would recommend! A+

Plumb Smart bailed me out of a botched DIY job a few years back. I've called Paul and his crew back four times since then to repair leaks and upgrade old components. I'm very satisfied with their response time, professionalism, and fee structure. I will continue to call on Paul and his crew for my plumbing needs.

Paul and the PlumbSmart team have been servicing my house since 2005. They are always very responsive, reliable, and honest. I highly recommend PlumbSmart to anyone looking for plumbing services within the service area.

Paul Little runs an honest, responsive business. I have used Plumb Smart in the past and his service is first-rate. I’d highly recommend considering Plumb Smart for your next plumbing job.

Paul was very responsive, arrived on time and solved problems quickly. We we very pleased. He and Sammie work quickly and efficiently.

I've had them fix leaky pipes, install a tankless water heater, and now a whole-home water filter. Each time they've shown up on time, done the work efficiently, and I've been very happy with the result. They also have fair pricing; best plumber I've ever worked with.

The service was great! I called at 8:00 am and they were able to fit me in that day. The guys were professional and the cost was reasonable.